The Knotty Brothers story begins in Hill City, Kansas and Jerome, Idaho, where Kyle and I (Holly) grew up, respectively.  At age 10, Kyle's family moved west to Oregon, a move that would place us both on a path toward one another.

Kyle and I met while skiing in Sun Valley, Idaho in the winter of 1989.  It was a fitting place to meet—outdoors, on the mountain, surrounded with the goodness of God's earth and sky.  We married the following year and, shortly thereafter, purchased a hundred-acre homestead in Oregon's fertile Willamette Valley. 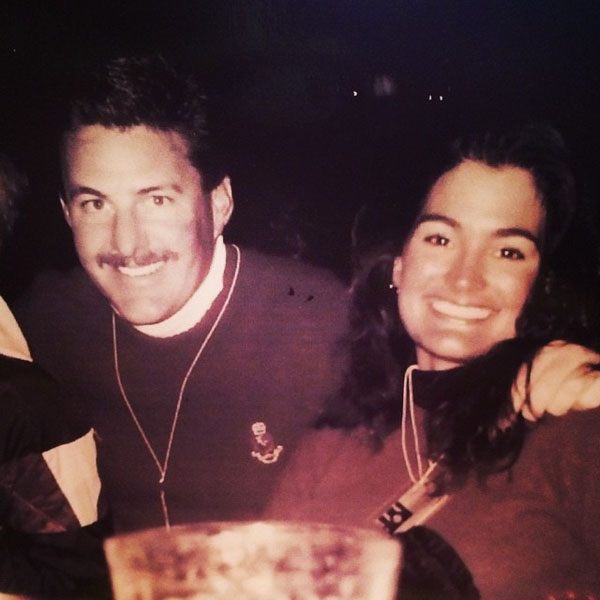 Kyle and I both wanted to provide an agriculturally centered growing-up experience for our children, and to that end we looked toward putting in a vineyard.  The ground, we were told, would never grow grapes.  Positive that the skeptics were wrong, we planted our first crop in 1990.

Two years later, in 1992, we used a 5-gallon trash can to gather our first "baby harvest."  It was a fulfilling and exciting event!  Our little piece of heaven could grow grapes (we had never doubted)!

Originally, the plan had been to grow grapes under contract with wineries; making our own wine with our grapes would be mostly just for fun.  So as we began to harvest, we turned to the excitement of making our first wine.

Our boys' grandma was first to get to tromp grapes, something that the boys loved to get into as they grew.

With grapes from our first harvest, a winemaker friend offered to teach us how to make and bottle our own wine.  We hand bottled at first; Kyle used an old corker; it was fun.  We made enough for just a case or two.  It was good wine! 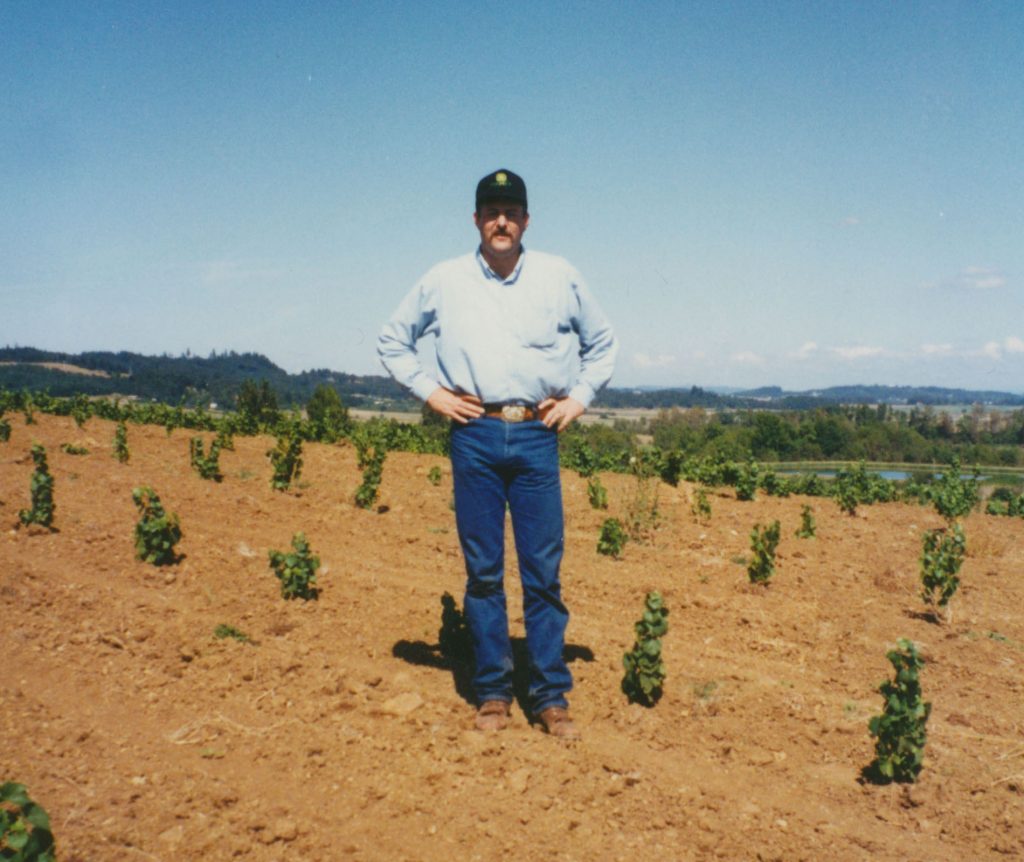 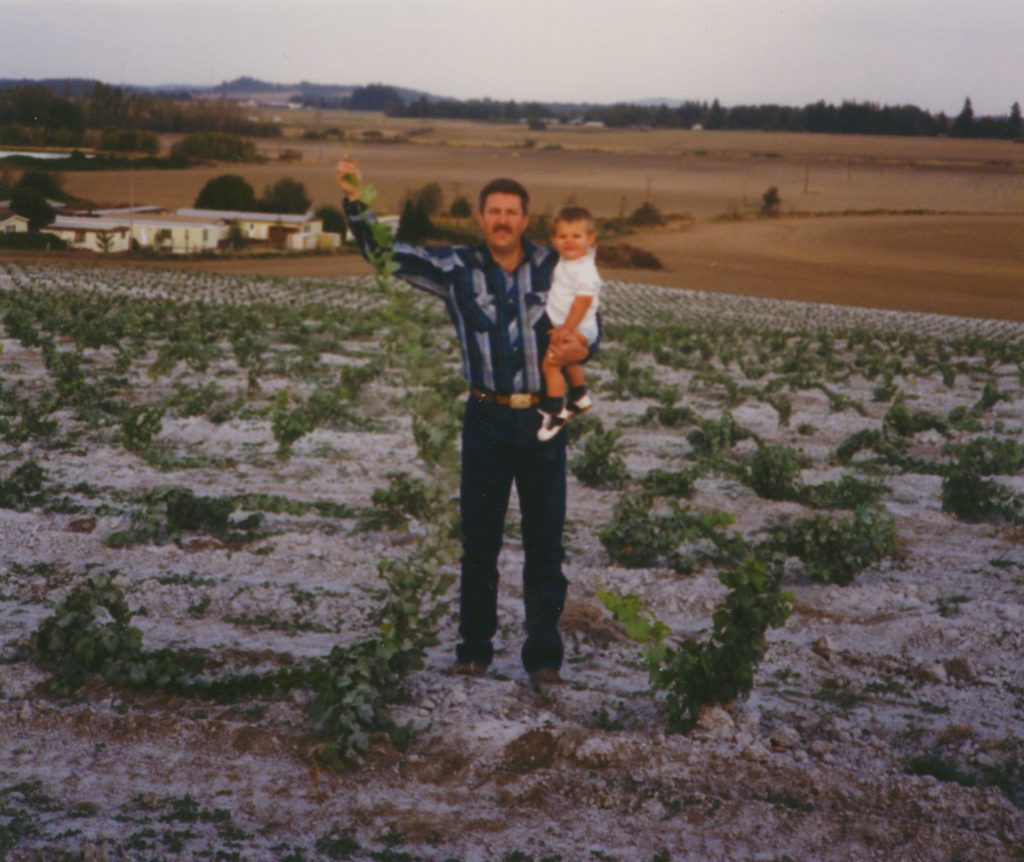 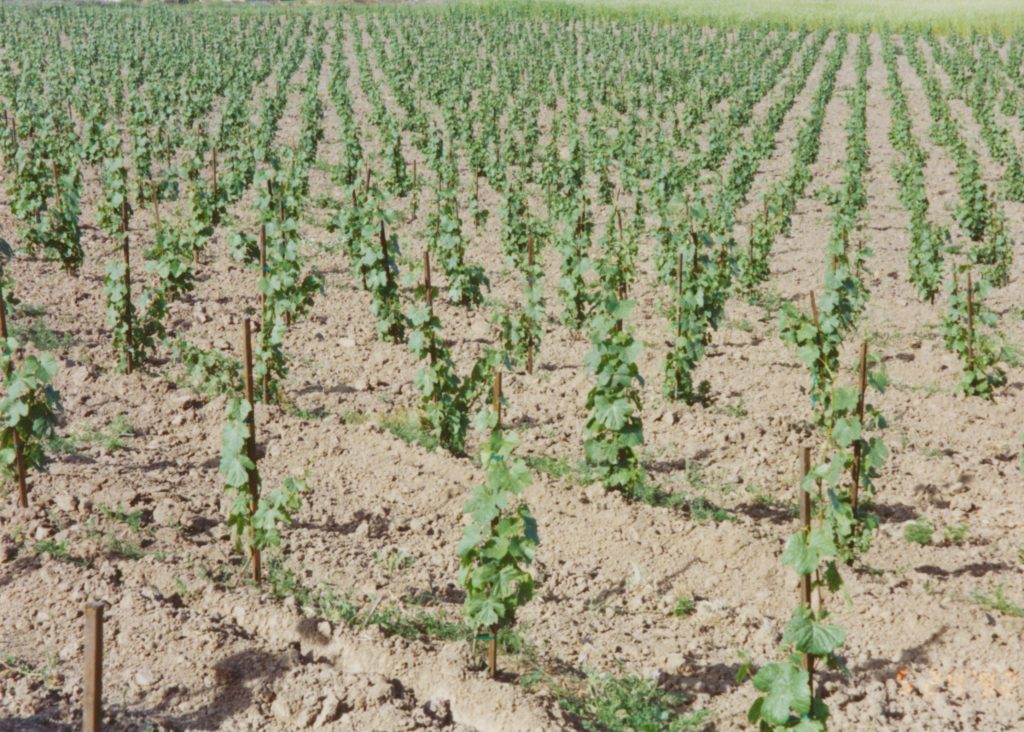 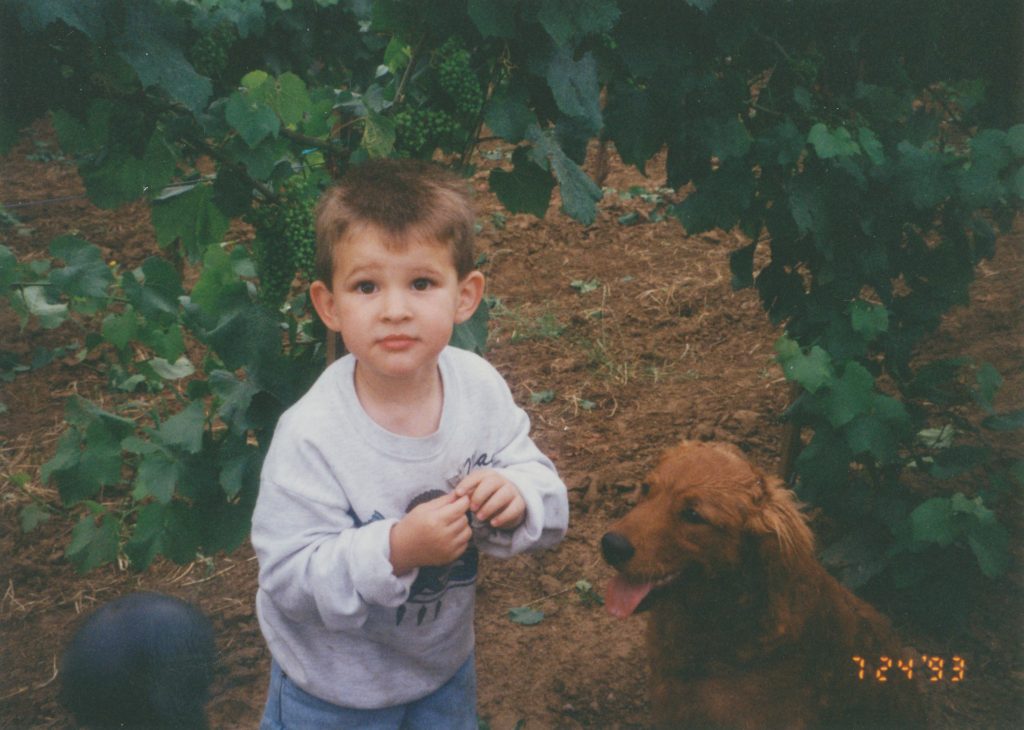 Brayden and Jolee in the vineyard - summer 1993 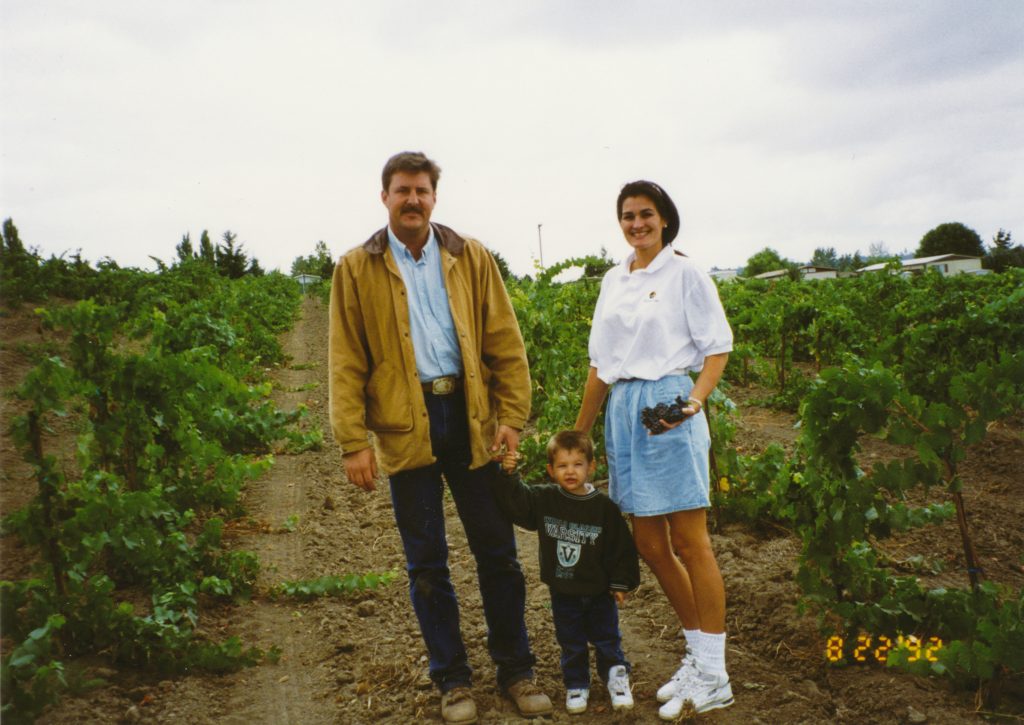 Kyle, Brayden and Holly in the vineyard - fall 1992 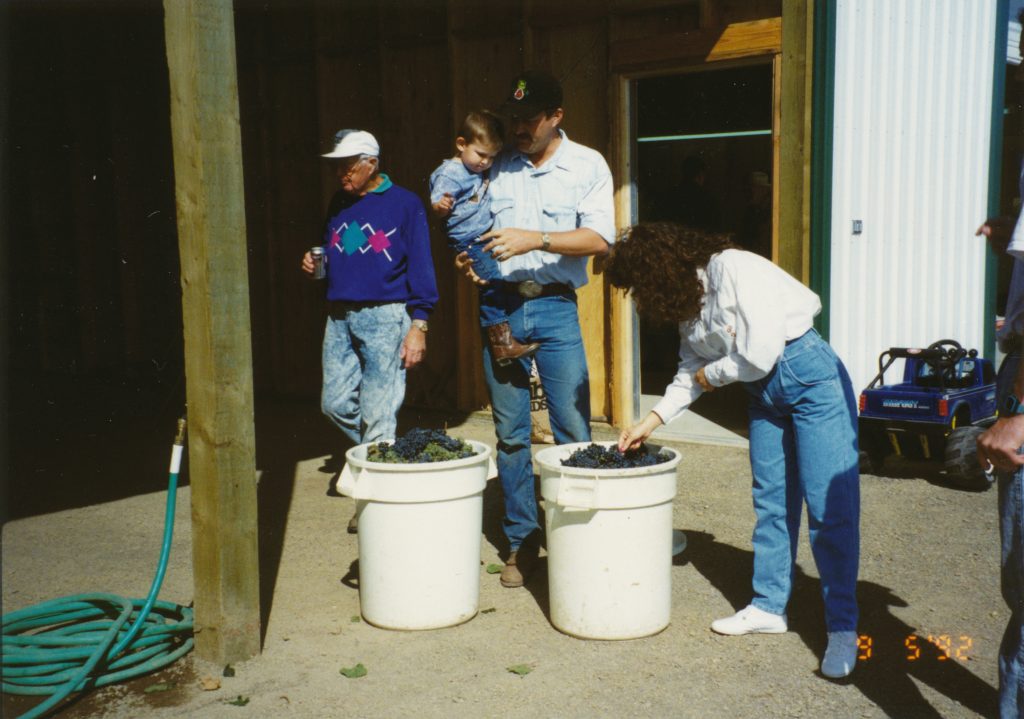 I've always felt that I was a good cook, and after making a few cases of our own wine, I thought, "If I can take our grapes and make wine that tastes this good, a winemaker should be able to do something really special."

So from then, on, we'd pull off some grapes from each harvest, from which we would make our private wine.  These we'd offer to family and friends, or store for use in special events or family get-togethers.

In time, these journeys into winemaking would result in our first commercially available vintage.  In the meantime, however, the focus was not just on growing good grapes, but raising good boys.

Raising the Knotty Brothers on the Farm

Brayden and Parker—the Knotty Brothers—were involved in the work of caring for the vineyard from their earliest years.  There was no shortage of work to do, and their help was not only planned, but integral to our family operation.

As they grew, Brayden and Parker learned to work hard—pruning vines, mowing lawns, driving tractors, uprooting diseased plants, pest control (starlings), and a host of other vital labors around the farm.

Of course, we saw our share of mishaps and misadventures, such as when Brayden, ready to take on the world with a fresh driver's license, blew the clutch out on our old international flatbed pickup, while dropping off loads of grapes to local wineries.  He had to get towed back to the farm, but he made his deliveries!

Or when Parker was out running his dog while driving the John Deere Gator, and ended up getting the Gator hung up on a trellis.  Such occasions provided for lessons on accountability and care, lessons that now serve the Knotty Brothers as they extend their entrepreneurial reach in adulthood.

Working the soil and harvesting the earth's fruit are highly rewarding to us as a family.  And so is the challenge of doing these things well.  We didn't set out to only survive, but to prove to ourselves that we could excel.  The challenge of caring for a successful vineyard required the exertions of us all.  As the Knotty Brothers grew, they assumed more and more responsibility.

For example, Parker was in charge of recruiting a crew to work all summer removing and replanting vines in response to changing markets, and to replace older vines with fresh ones.  At other times, the boys were enlisted to mitigate damage to the crop that flocks of starlings threatened to inflict.  Nature was just as much our enemy, it seems, as it was our ally.

In addition to work on the farm, the Knotty Brothers were…just normal boys.  The tussles of friendly sibling competition, and even the occasional black eye, were also part of their growing experience.

Through it all, Brayden and Parker became the best of friends.  And all things on the farm revolved around the joy and goodness and struggles of family life. 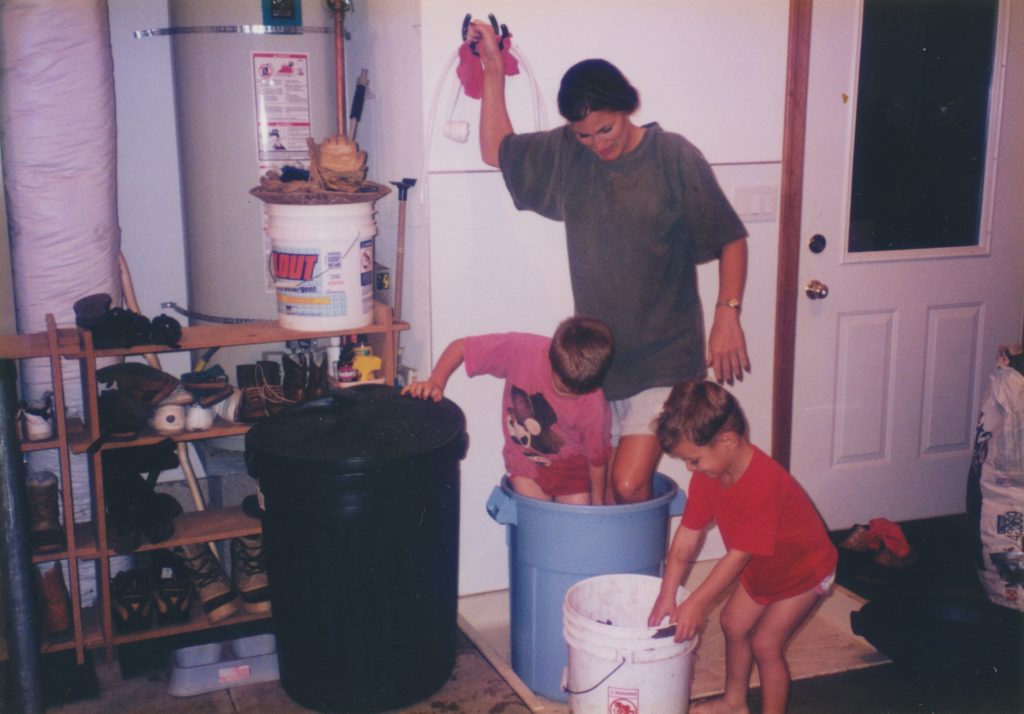 Holly and the Knotty Brothers stompin' - 1995 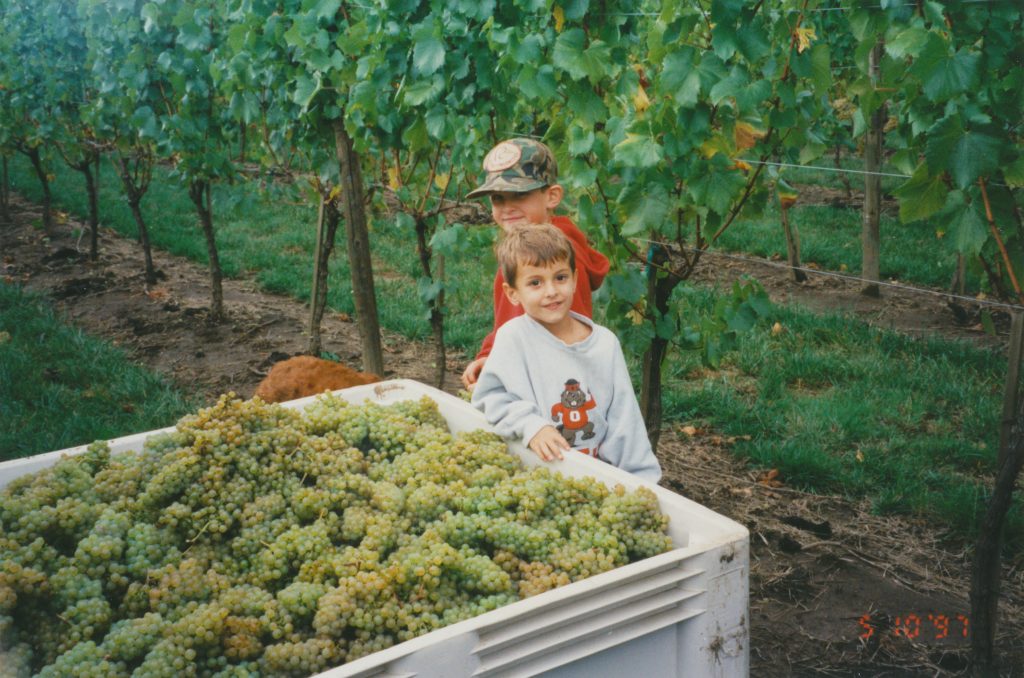 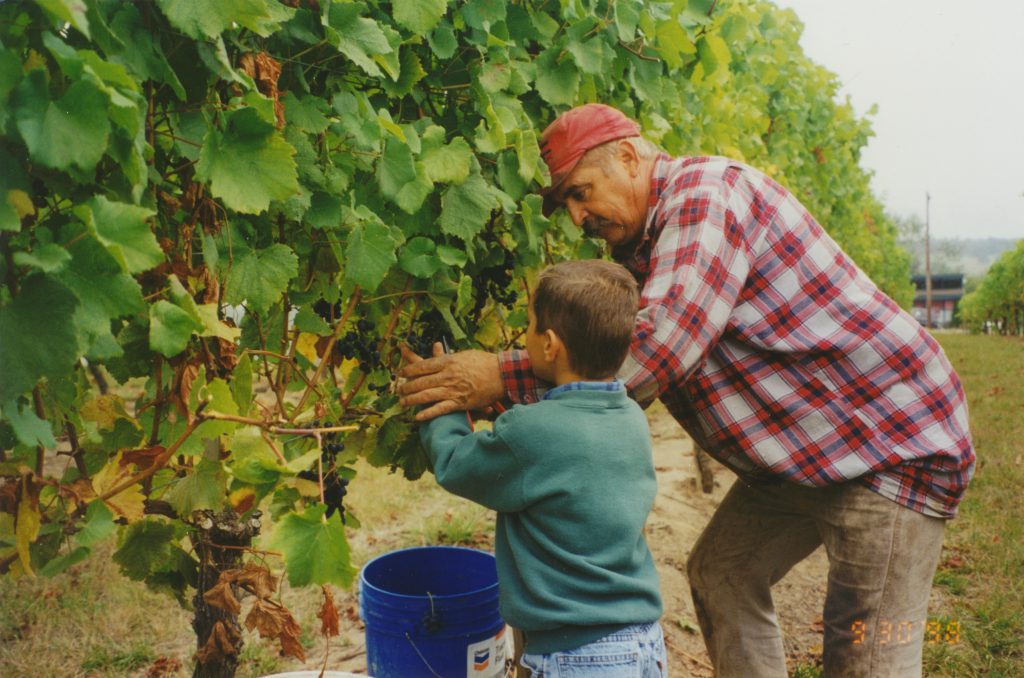 Parker learning to work the vineyard - 1998

The Knotty Brothers Earn their Title

Of course, the boys were not alone in experiencing growing pains on the farm.  As the vineyard operation turned into a larger production, I would often have the boys along with me to deliver grapes to the wineries.  And trucking tons and tons of grapes with two boys in the cab provided for a unique kind of stress.

With grapes loaded and ready to haul, I'd pick the boys up from school and head out on a delivery run.  Good boys though they were, they'd naturally get into fights as we traveled.  With regularity they were commanded to calm down, and they usually did their best.

On one noteworthy delivery, which took us up a hill on a narrow, windy road, too many appeals to "tone it down" and "get under control" went unheeded, and the boys were booted from the cab to walk the hill, until they'd been seized upon with civility and self-control once more.  The delivery was made and the boys and I returned safely home.  However, the boys didn't come home entirely unscathed from the ordeal.  Their testing of my  patience to the limit had earned them the distinctive title "The Naughty Brothers."  However, as in our family mistakes are but stepping stones on the path to success, the title quickly transitioned into something more encouraging of a happy reminiscence, rather than a painful regret:  "The Knotty Brothers."

As the work evolved, and we ventured deeper into the wine-making process, the Knotty Brothers began learning that, on a farm, "the work is never done."  As soon as we'd finish with grape deliveries and making our annual private wine, back to the farm work we'd go, with the boys becoming ever more integral to the operation. 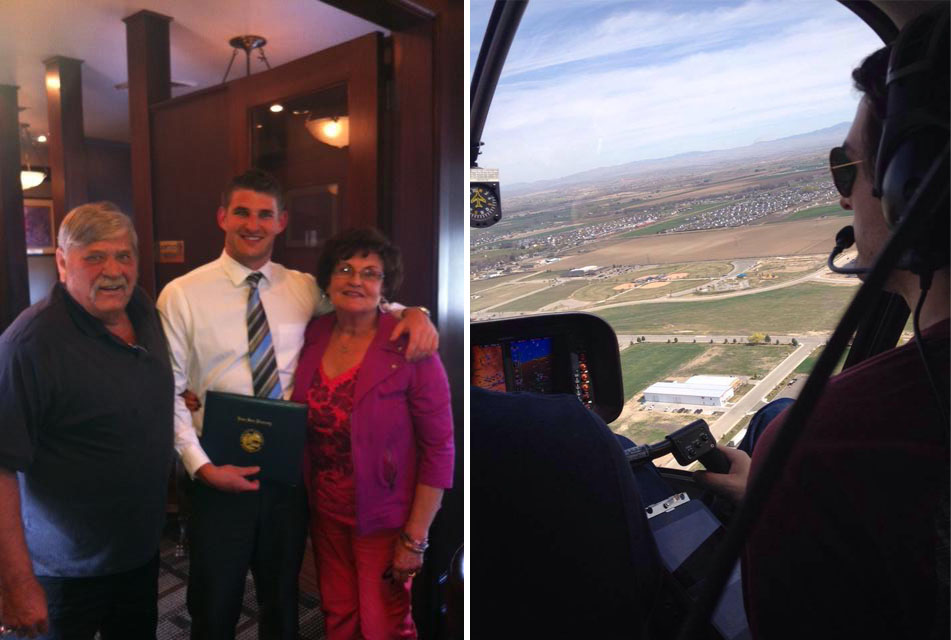 Children eventually grow up.  But what they'll do as adults shouldn't be taken for granted.  Kyle had once played professional baseball, and coached the Knotty Brothers as they grew.  The boys enjoyed following in their dad's steps, and with their innate athleticism, excelled in the sport enough to have real opportunities to pursue baseball beyond High School.

Brayden was offered sports opportunities in both Montana and Washington.  But with the promise of heavy demands on his schedule, he decided that he didn't want his life to be entirely consumed by sports. Instead, he pursued and earned a Bachelor's degree in Business Administration and Entrepreneurship Management from BSU (left of photo).  He then earned a Master's degree from Idaho State in Athletic Administration.

Parker received scholarships to play as a pitcher for Treasure Valley Community College and gladly accepted.  But a severe shoulder injury sustained during college play would bring his baseball career to an early close.  Rather than leave TVCC, however, Parker chose to stay and study aviation at Silverhawk Aviation Academy in Caldwell.  He went on to complete his helicopter licensing as a Private Pilot, Instrument Pilot, and Commercial Pilot (right of photo above).  He also earned his Certified Flight Instructor degree and is studying for the Aviation Safety Management System certification.

A New Venture for the Knotty Brothers

One day, after the boys were off and established in their life pursuits, we were all visiting with a family friend and winemaker who had just purchased a bottling line for his winemaking operation.  The friend related how the move had positively impacted his bottom line.  As we talked, we began to see that breweries, wineries, cider houses, and other beverage makers, might have an interest in a more streamlined path for getting their products "from tank to table."

So we set out to research the feasibility of bottling wine commercially.  We learned that the process for bottling and handling wine was different than it was for beer, or for cider, or for any other beverage.  We also saw that a new market was, at that time, just beginning to emerge: wine in a can.  Because bottles can break easily, bottled wine was more of an indoor product—not something you could reasonably take on many outdoor adventures. But the high portability and container durability of cans promised that canned wine could become the next big thing for outdoor enthusiasts.  The timing seemed ideal for getting into this new market.

Each member of the Knotty Brothers team took on a different task as we waded through the process of getting wine ready for market in a can—where to source the cans, how to re-tune the packaging process for other beverages, putting together a business plan, securing loans, the legal aspects of distribution and selling alcohol, etc.  It was very much an undertaking.

Our research had given us a view of the trends, drinking patterns, and markets that would make a mobile bottling business viable.  It truly was area of great growth potential—and with not too many players, as yet.  By the time we were done, we'd acquired what we needed to start a mobile bottling and canning business.

As Dunning Vineyards' 2016 harvest was coming off, we looked to package our own wine first.  "We've grown our own grapes…we now have our own bottling and canning equipment…let's can and market our own wine!"

From now on, the Knotty Brothers would make their own wine and can it for commercial sale.  And they'd be available to help wineries, breweries and cider houses do the same.

FROM TANK TO TABLE

"From Tank to Table" - Continuing a Legacy of Quality

"Footprints in the rows and fingerprints on the vines"—that's how it all began, and those words are a testament to the family nature of our wine-making operation.  Nearly thirty years after planting the first vines in our Willamette Valley soil, "Knotty Brothers" isn't just a name—it speaks to the history of our two boys learning and growing in the dirt from which our fabulous wine ultimately comes.

Over the years, we've cultivated the farm’s nearly 250 acres to produce for various wineries throughout Oregon & Washington: King Estate, Willamette Valley Vineyards, Argyle, Sass, Tori Mor, Dobbes Family Estate and Wine by Joe…to name a few.  Our most recent adventure is our custom crush Pinot Gris, made from grapes grown exclusively in the family vineyard, and canned by our own operation.

We take pride in working together and having fun, all while making quality our top priority. And because we make our own wine from start to finish, we've got experience and capacity that can greatly benefit other independent producers.

And the Knotty Brothers are at the heart of it all.  There's no two ways about it—these boys work well together! Truly boasting unique talents, personalities and interests, Brayden and Parker bring it all together in Knotty Brothers Bottling to create the perfect business synergy.

If you've got a product that's ready to be bottled and are looking for a bottler that knows how to get things done right, Knotty Brothers Bottling is a great fit.  We'll get your product from tank to table!  And if you're looking for a good wine that you can take anywhere, we've got something we'd like you to try... 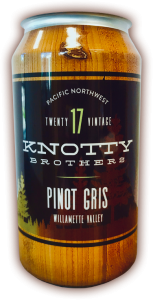 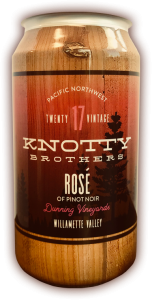 Get Our Latest News

Thanks for subscribing!  Watch for good things from the Knotty Brothers!

Something went wrong. Please check your entries and try again.
Scroll To Top